I have a passion.
I want to write software.

I share this passion with many other developers.
Actually, I developed software. For years. I wrote assembler programs for Z80 when the 'PC' was not yet invented. I developed computer games on HP41c to play at university with friends, and exchanged my software with other fellow students.
I was involved in community based activities – sharing and exchanging information with peers for programming in Machine code on the HP41c.

After finishing my university degree as an electrical engineer, with expertise on software development I started my professional career … as a software developer …
And I loved it.

I have a passion.
I want to write software.
A curious thing about writing software is that in many cases it is for global use.
So I went to my boss and told him we could/should develop software for the global market.

But the answer was short.

The risk was to high. As an European company, you should develop a solution for your local country. I speak 1990.
We were an Autodesk Authorized Developer at that time. The word alone …. 'Authorized'
We created some real great stuff. We talked to the core developers of Autodesk, until this was not possible/plausible any more due to Autodesk policy. We had to talk to more 'commercial' people. To Business people. They were interested in our business ideas, we wanted to share technical solutions. It was not fun.

So we created a community together with other 'Authorized Autodesk Developers' and we shared ideas and information.
ADGE: Autodesk developers group Europe. We came together trough-out Europe. And every 6 weeks there was a physical meeting in Basel (Switzerland).
It was a fun time.

At that time, I founded DFC Software Engineering.
Together with other SME's we managed to work together and compete against bigger companies in our local market.

One of the major problems of a software SME is the entrance to the market. As an 'Authorized Autodesk Developer', you are dependent on Autodesk. And they always needed more and more money, from their clients and from their developers. This was a hard time.


I have a passion.

I want to write software.
And I want to be independent.
But this was a very expensive choice.

Access to the data was also very expensive. We couldn't afford that as a small SME.
So we developed software for our clients who had access to their own data, or who could afford GeoData from market providers.

But the licenses for the basic technology became more and more expensive. And our added value was on op of this expensive licenses. So we started to create solutions based on open source technology.

We where users of the technology. At this time, we were not involved into the communities of the software we've used. But we were able to create great solutions and could compete on the market against much more bigger players.
DFC Software Engineering became a company of >10 persons (2004).


I had some idea's about my passion and how to develop it.
I wanted to write open source software.
For users to be able to create their own sort of 'google maps' front-end and back-end.

But I didn't write the code myself. I decided to hire others to do the writing.
I became the 'spiritual' father. It was an expensive hobby. But very passionate. 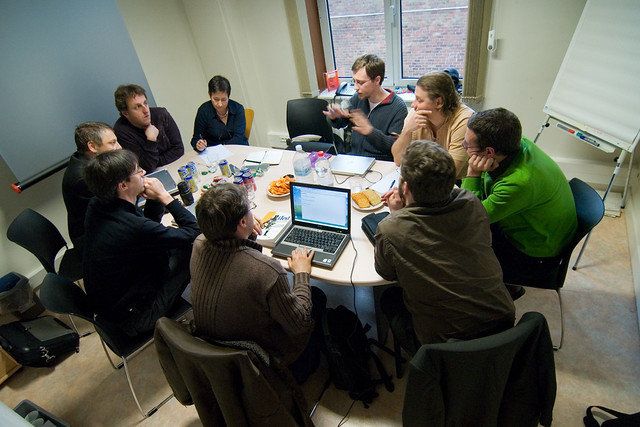 We can show references around the globe. A lot of them are behind a closed door, because the strength of the technology is not for processes into the open.

Environmental check (press on '>omgevingscheck' to start the application)

to name only a couple of the applications realized by Geosparc.